A farmers congress was held at the Municipal Hall of Enrile yesterday August-03 to further boost peanut production in the so-called “Peanut Capital of the philippines ” town of Enrile.

The Office of the Provincial Farmer (OPA) allegedly included the Department of Agriculture (DA) and Department of Trade and Industry (DTI) who provided guidance on production especially the proper maintenance, innovative technology that can be used in production, and how to improve the peanut business.

Mabasa added that such activity is important for farmers because there is a strong demand for peanut products in the locality where it needs to be prepared for high value and can also join China’s import and export products In another country.

He will strive to increase production due to the unique type of soil in Enrile suitable for planting peanuts.

11 barangays in Enrile are planting peanuts that the farmers here need to organize in preparation for its contracting with Growers philippines .

“We have a marketing strategy that’s why we need to boost peanut production in Enrile. We will guide them so they can focus on one product.

LGU Enrile also wants to be an economic enterprise or consolidator for their continuous identity of Peanut Capital of the philippines ,” Mabasa promised.

Meanwhile, along with the Enrile festival was held the Peanut Festival where there was a peanut cooking contest. Mabasa is one of the judges in the said contest. ( Susan L. MAP) 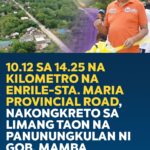